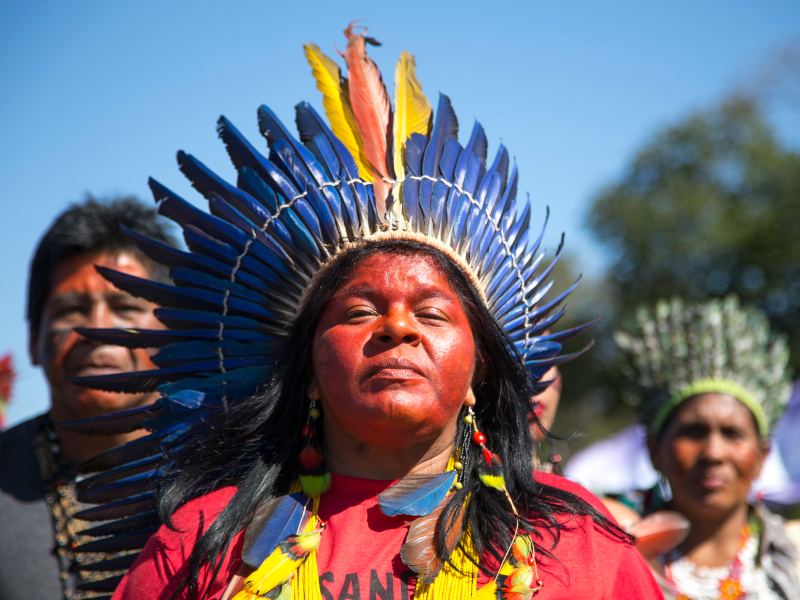 A week since the Climate Leaders Summit, where Brazilian President Jair Bolsonaro pledged to work with Indigenous peoples to protect the Amazon, his government is being accused of acting to intimidate them.

At least two prominent Indigenous leaders in the country have recently been summoned for police questioning for criticizing the government, raising concerns from human rights organizations, politicians, celebrities and academics about Bolsonaro’s abuse of power and the undermining of freedom of expression.

Sonia Guajajara, one of the top Brazilian Indigenous activists and head of the Articulation of Indigenous Peoples of Brazil (APIB) — the country’s main Indigenous association — was called on April 26 to appear before the federal police to testify in a probe for allegedly “slandering” Bolsonaro’s government.

“The persecution by this government is unacceptable and absurd. They will not silence us,” Guajajara said on an April 30 Twitter post.

Guajajara added the case was connected to an investigation into the Maracá web series, released last year by APIB, which strongly criticizes government policies toward Indigenous peoples, particularly Bolsonaro’s widely assailed handling of the COVID-19 crisis. The complaints were also submitted to Brazil’s Supreme Federal Court, which ruled in favor of the Indigenous groups, determining that the federal government must adopt measures to contain the spread of COVID-19 among Indigenous communities.

The police probe into Guajajara, which alleges “a campaign of slander and defamation,” was prompted by Funai, Brazil’s Indigenous affairs agency. Funai president Marcelo Augusto Xavier said the APIB series had spread “inaccurate and tendentious information, accusing the government of having abandoned the Indigenous peoples” during the pandemic, according to a report by news website G1.

In a statement sent to Mongabay, Funai said it doesn’t comment on ongoing police investigations but noted that “it must strictly adhere to the principles of legality, impersonality and morality which does not comply with any supposedly illicit stance, since its purpose is to defend the public interest,” adding that “all citizens, Indigenous and non-Indigenous, are subject to the Brazilian law.”

Guajajara, who also ran as a left-wing vice presidential candidate in 2018, has been an outspoken voice against the Bolsonaro government’s policies against Indigenous people, the increase of deforestation in the Amazon, and the escalation of human rights violations in the country.

Since Bolsonaro took office in 2019, deforestation has soared nearly 50% in two years, hitting its highest level since 2008. Invasions of Indigenous territories increased by 135% in 2019, according to the Catholic Church-affiliated Indigenous Missionary Council (CIMI), and at least 18 people were murdered in land conflicts last year. Since November 2019, five Guajajara leaders were murdered in areas dominated by powerful landowners and logging syndicates.

Despite the worsening situation, fines for environmental crimes dropped by 42% in the Amazon Basin in 2019, and the federal government cut the budget for environmental enforcement by 27.4% this year, a report by Observatório do Clima, a consortium of NGOs, revealed in January.

APIB has filed an appeal to suspend the investigative process against Guajajara.

Second case in a week

On May 2, Indigenous chief Almir Naramayoga Suruí of the Suruí people in the northern state of Rondônia said he was also being monitored and questioned by federal police. Again, the investigation stems from a Funai complaint over an alleged “defamation campaign” against Bolsonaro government. The case accuses members of the Metareilá association of the Suruí Indigenous people, represented by Almir Suruí, of slander.

On his Twitter account, the chief posted a picture of himself and Sonia Guajajara with the caption, “The intimidation will not silence our voices.”

Almir Suruí is one of the top Indigenous activists in Brazil, having received the 2013 U.N. award of “Forest Hero” for his work to conserve Indigenous lands. In January this year, he and Raoni Metuktire, chief of the Kayapó people, petitioned the International Criminal Court (ICC) to investigate Bolsonaro for crimes against humanity, accusing him of unprecedented environmental damage, killings and persecution.

International watchdog Human Rights Watch said in a statement it is “deeply concerned” with the police inquiry into Sonia Guajajara and APIB, adding that “any attempt by the Bolsonaro government to use the justice system in retaliation for efforts to protect the rights of Indigenous peoples would be a flagrant abuse of power.”

The NGO Amazon Watch also slammed the Bolsonaro government for its “relentless attacks” on Indigenous peoples and the destruction of the Amazon Rainforest. “Funai was meant to protect Indigenous people, not to persecute Indigenous leaders who demand that their government fulfill their obligations to protect its people during a pandemic,” said Brazil Program Director Ana Paula Vargas in a statement.

In a statement, APIB said the government’s move “seeks to intimidate Indigenous peoples in a clear attempt to curtail our freedom of expression, which is the most important tool for denouncing human rights violations.”

Retaliation against Bolsonaro critics in general has escalated in recent months. Brazil’s most famous Youtuber, Felipe Neto, who accused Bolsonaro of “genocide” for his handling of the pandemic, which has triggered more than 400,000 deaths in the country, is under investigation for slander under the dictatorship-era National Security Law.

Federal police have carried out 84 investigations under the security law during Bolsonaro’s first two years in office, according to the newspaper O Globo. The annual average before he took office was 11.

In March, Brazilian police have also investigated former cabinet minister Ciro Gomes for calling Bolsonaro a “thief,” and sociologist Tiago Costa Rodrigues for calling him a “liar.” Most recently, anti-Bolsonaro activist Rodrigo Grassi Cademartori, known as Rodrigo Pilha, was reported by a local newspaper to have suffered inhumane treatment and torture in prison. Pilha was detained in March this year for protesting with a banner reading “Bolsonaro Genocida” or “Bolsonaro genocidist” in a demonstration in the capital, Brasília.

The Brazilian government’s communications office did not reply to requests for comment. 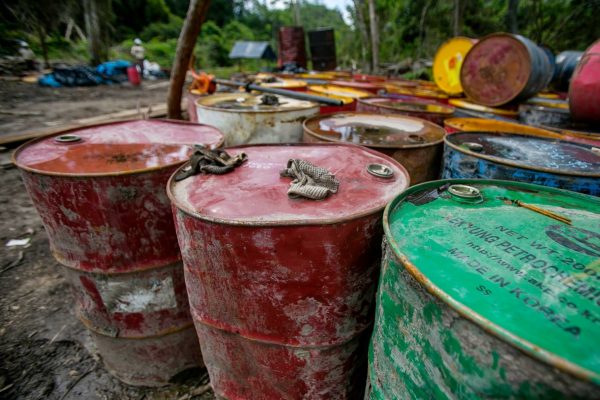