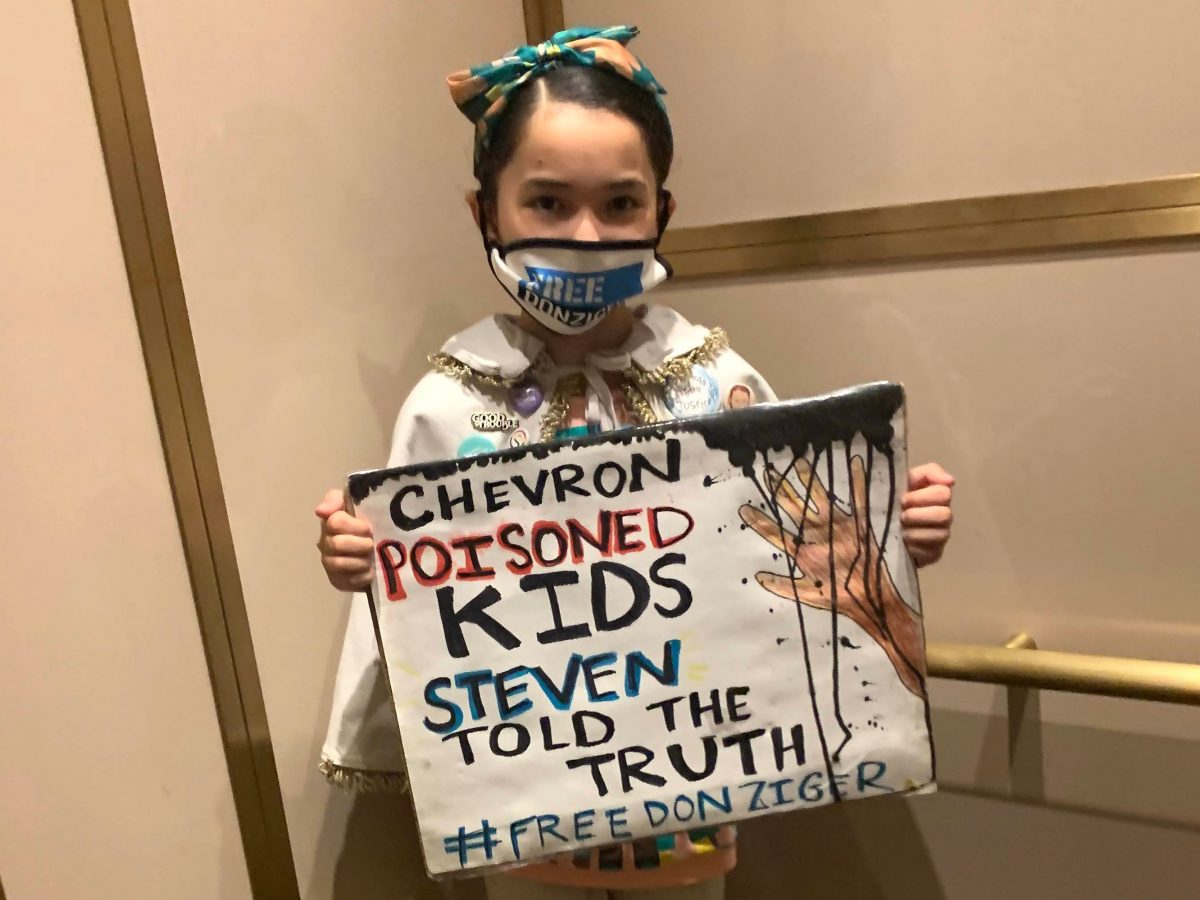 Steven Donziger, the human rights lawyer who spent nearly three decades fighting Chevron on behalf of 30,000 people in the Ecuadorian rainforest, has been sentenced to six months in federal prison for “criminal contempt.” On October 1, in a lower Manhattan federal courtroom, Judge Loretta Preska justified imposing the maximum penalty by asserting that Donziger, now 60, had not shown contrition. She said, “It seems that only the proverbial two-by-four between the eyes will instill in him any respect for the law.”

In May, Preska had found Donziger guilty after a trial without a jury. And now Donziger, along with his family and scores of supporters, had to listen to the federal judge compare him to a mule who needed to be beaten with a piece of wood before complying.

Prior to sentencing, Donziger reminded the court in a polite and at times emotional statement that he had already spent 787 days under house arrest in his New York City apartment, a confinement that had put great pressure on his wife and teenage son. He explained that the court-imposed restrictions meant that his son had a father who was “unable to travel, leave his home except under narrow exceptions with court permission 48 hours in advance, unable to even go out for dinner, unable to have a father capable of doing all the things a father can do and should do with a child, including act with spontaneity.”

But even though Donziger was facing prison, he told the court he would not back down: “I have been attacked and demonized for years by Chevron in retaliation for helping Indigenous peoples in Ecuador try to do something to save their cultures, their lives, and our planet in the face of massive oil pollution. That’s the context for why we are here today.”

In response, Preska read out a prepared 50-minute statement for her harsh sentence. “Mr. Donziger spent the last seven plus years thumbing his nose at the US judicial system,” she said. “It’s now time to pay the piper.”

Donziger will not go to prison immediately. His attorneys will challenge the criminal contempt conviction, and they will also ask a higher court to put off his prison sentence pending that appeal. But Preska will keep him under house arrest, once again calling him a “flight risk.” In the past, she has warned that he “has ties to Ecuador,” insinuating that he would abandon his family and his New York City apartment to go live in the rain forest.

You can’t understand this latest injustice without looking back at Chevron’s long campaign against Donziger, who won a landmark pollution case against the oil giant in Ecuadorian courts in 2013. Chevron was ordered to spend $9.5 billion to clean up a contaminated area the size of Rhode Island, and to pay for the health care of the 30,000 plaintiffs whose communities have seen a rising number of cancer cases. Instead of following the legal order, Chevron launched a case in New York, and in 2014, a federal judge, Lewis Kaplan, found Donziger and some of his Ecuadorian allies civilly liable for racketeering, bribery, and fraud. Then, Kaplan asked the federal prosecutor for the Southern District of New York to put Donziger on trial for “criminal contempt” connected to the original conviction. The federal prosecutor refused, so Kaplan handpicked an attorney from a private firm, Rita Glavin, to prosecute – a nearly unprecedented legal maneuver.

As Chevron’s vendetta continued, international outrage grew. Just before sentencing, the United Nations High Commissioner for Human Rights issued an opinion in Donziger’s favor, ruling that his two years of house arrest was illegal under international law and that he had been denied the right to a fair trial. A panel of five prominent jurists called that confinement “arbitrary” and said that both judges, Kaplan and Preska, had shown “a staggering lack of objectivity and impartiality.” In court, Preska briefly acknowledged the UN findings only to dismiss them.

Once again, the mainstream media is largely ignoring Chevron’s campaign of retaliation against Donziger. The New York Times, Donziger’s hometown newspaper, reported nothing in the two days after the verdict, and has barely mentioned the case for the past seven years.

Back in 1993, Donziger, fresh out of Harvard Law School, joined an ongoing fight for environmental justice. The struggle against Texaco, which was taken over by Chevron in 2001, began in the late 1980s in eastern Ecuador, where the oil company drilled and operated wells from 1972 to 1992. Texaco had disposed of its drilling wastes by methods that in some cases would have been illegal in the United States. (More details are here.) Local people began organizing against the pollution in their rivers and streams and in oil-soaked stretches of their land. The case started in the New York federal courts, but then a judge ordered it sent back to Ecuador – a move that Chevron’s lawyers welcomed at the time. So, in 2003, the legal battle re opened in the eastern oil frontier town of Lago Agrio.

The case wound its way up through three levels of the Ecuadorian courts, and in the end, after Chevron exhausted all appeals, its guilt was confirmed. Meanwhile, though, its counterattack back in New York was underway. Chevron charged that Donziger and his allies had committed bribery and fraud in Ecuador to win their case, and it used the Racketeer Influenced and Corrupt Organizations Act (RICO), which had been designed to prosecute the Mafia. Donziger and the codefendants expected they would face a jury, but at the last minute, Chevron dropped its demand for financial damages. Under RICO law, this meant the defendants lost their right to a jury, and Kaplan alone would decide the case.

Donziger’s supporters objected to Kaplan’s pro-corporate statements and hostility toward the human rights lawyer during the RICO trial. Kaplan is a career corporate lawyer turned judge, with no experience in Ecuador or anywhere else in the Global South. Yet he decided which witnesses to believe and which to disregard – and in 2014 he found Donziger and the others guilty.

Only a corporation like Chevron worth billions could have financed such a prosecution. The oil giant paid for a disgraced former judge named Alberto Guerra and his family to move to the United States. Chevron’s lawyers rehearsed Guerra’s testimony with him 53 times before he went on the witness stand, where Guerra claimed that Donziger and an Ecuadorian lawyer had offered him a $500,000 bribe and that the pair had ghostwritten the final judgment against Chevron. Donziger and his defense team estimate that Chevron has spent $2 billion on legal fees and other costs. (Chevron’s designated spokesman, James Craig, declined to give the corporation’s own figure for how much it has spent on the case. Craig also declined to say if Chevron is still paying Guerra or if he is still living in the United States.)

Chevron’s attacks against Donziger did not stop after it won the racketeering verdict. The current contempt case began when the oil corporation petitioned Kaplan for access to Donziger’s personal computer and cell phone. Donziger declined, arguing that his electronic communications would give Chevron’s lawyers “backdoor access to everything we are planning, thinking, and doing.” He said he would wait until the US Court of Appeals heard his argument, and if it required him to, then he would hand over his electronics. Preska dismissed his defense and convicted him in May – again, without a jury.

It’s vital to recognize Chevron’s role in this legal persecution. Its attorneys show up at every Donziger legal case – even the ones that don’t directly involve the company. At the same time as Donziger was defending himself against the criminal contempt charge, he was also fighting the effort to take away his license to practice law in New York. The state bar association appointed a special officer named John Horan to preside over open hearings, and he found in Donziger’s favor. Horan, a former prosecutor, had harsh words for Chevron: “The extent of [Donziger’s] pursuit by Chevron is so extravagant, and at this point so unnecessary and punitive, [that] while not a factor in my recommendation, [it] is nonetheless background to it.”

Putting Donziger in a federal prison for six months is more than vindictiveness. The $9.5 billion judgment against Chevron in Ecuador still stands, but the oil giant unloaded its assets there. That means the plaintiffs must collect in other countries where the corporation has holdings. Kaplan’s racketeering verdict specifically prohibited the Ecuadorians from forcing Chevron to pay the judgment in the United States. But there are promising possibilities in Canada and elsewhere. Donziger is forced to put those fights on hold while he tries to stay out of prison.

But there are signs that Chevron has gone too far, and that relentlessly pursuing a human rights lawyer is damaging its international reputation. The United Nations High Commissioner for Human Rights is only the latest sign of concern and anger. Sixty-eight Nobel Laureates have shown their solidarity; another 475 lawyers and human rights defenders have signed a letter that calls his prosecution “one of the most important corporate accountability and human rights cases of our time.” Representative Jim McGovern, a Democrat from Massachusetts, said after the prison sentence that “it’s the executives at Chevron,” not Donziger, “who should be behind bars.”

What’s more, a movement to boycott Chevron is in the early stages. Big Oil is under scrutiny because of its role in the climate crisis, and divestment campaigns on college campuses and elsewhere are starting to have an impact. Large institutional investors may also start to pay attention. CalPERS, the giant retirement investment fund for California government employees, is headquartered in Chevron’s home state, and the teachers and municipal employees who contribute to it may ask why it holds $456 million of the oil giant’s stock.

Chevron must have hoped that its long retaliation campaign would force Donziger to abandon the fight for environmental justice – but it appears its aggressive strategy is backfiring. 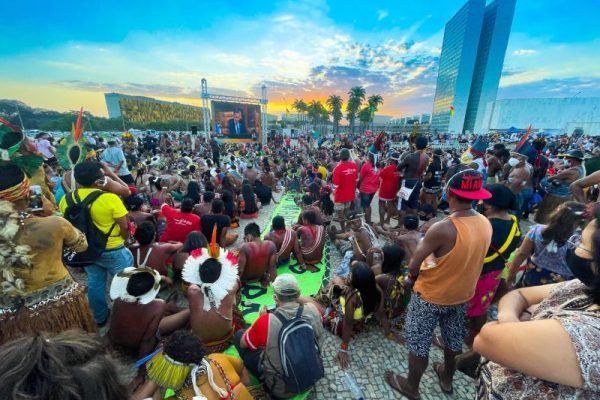