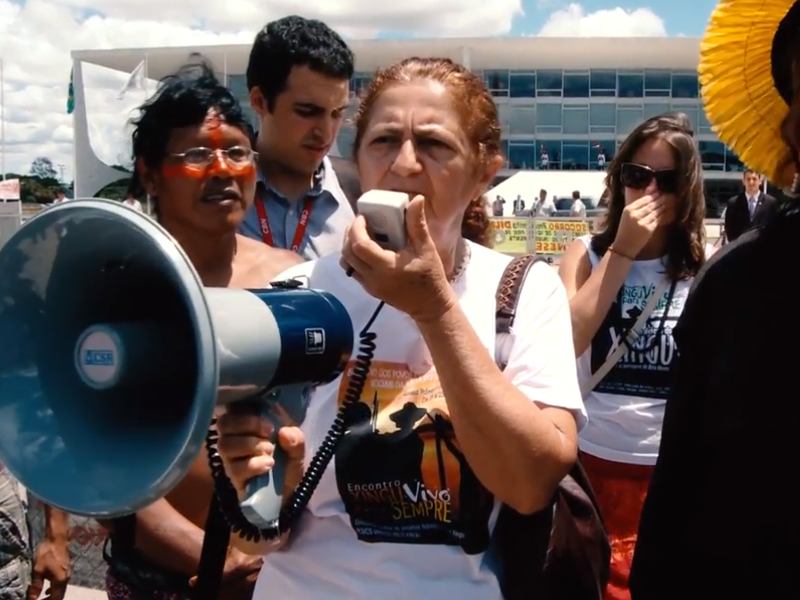 Antônia Melo is an Amazonian warrior. Her steadfast struggle for social and environmental justice in the Amazon has redefined the possible with the power of grassroots organizing and inspired a generation of local activists. For this reason, she could not be more deserving of the Alexander Soros Foundation Award, bestowed yesterday for her leadership in the campaign to stop Brazil’s Belo Monte mega-dam. The prize is a testament to the enduring legacy of her tireless, vital work to defend the Amazon and its peoples from a disastrous development model and a recognition of the righteousness of her cause.

Daughter of landless rural workers from Brazil’s Northeast, Antônia’s family relocated to the Amazonian city of Altamira on the banks of the mighty Xingu River to eke out a livelihood in 1954. Her humble roots would shape her life’s work on behalf of marginalized peoples and the ecosystems upon which they depend.

In 1989, Antônia participated in a massive mobilization of the Xingu River’s indigenous peoples against the construction of the Kararaô hydroelectric dam, the antecedent to Belo Monte. Her experience in this groundbreaking indigenous mobilization – which would prove instrumental in stopping the Brazilian dictatorship’s development plans for the Xingu – inspired her unwavering defense of the rights of the Amazon’s indigenous and traditional communities.

Following this pivotal moment, Antônia took on critical human rights issues in the region including combating extreme poverty and halting violence against women and girls. Working resolutely for sustainable local development solutions, Antônia was among the first, highly vocal opponents to her government’s resurgent plans to dam the Xingu River. In 2008, she helped to organize the massive “Xingu Encounter: Alive Forever” mobilization in Altamira, which assembled 5,000 activists from local, national, and international organizations, including over 1,000 indigenous people from across the Xingu basin and Brazil. This event shone a global spotlight on growing resistance to plans to build the Belo Monte dam, and the overwhelming support she encountered motivated her to found the Xingu Alive Forever Movement, convening a coalition of social movements, indigenous organizations, and NGOs to challenge the mega-project.

Antônia’s credibility and organizing skills built effective resistance to the project and generated a polemic that was fundamental to the multiple delays, setbacks, and reputational risks suffered by Belo Monte’s proponents. While the $10 billion project enjoyed the overwhelming support of the corrupt alliance between the Brazilian government and a powerful set of industry actors, it was paralyzed repeatedly by lawsuits, protests, and direct action inspired by MXVPS leadership. Nothing better embodies this David versus Goliath conflict than the tireless activism of Antônia Melo.

Yet in the end Goliath won the battle. After years of struggle, the ruining bulldozers of the Brazilian government succeeded in steamrolling resistance and building the dam. Today it stands as a testament to insanity on the Xingu, wreaking incalculable human suffering and environmental devastation. Antônia was forced not only to witness the displacement of thousands of families, Altamira’s descent into chaos, the ethnocide of local indigenous communities, the demolition of forests and biodiversity, and the strangling of this vital waterway, but also the destruction of her own home to make way for Belo Monte’s fetid reservoir.

Never to be silenced, this epic tragedy spurred Antônia to renew her dedication to the Amazon’s peoples and its irreplaceable ecosystems. Her struggle has inspired resistance to new Amazon dam projects, such as those planned for the Tapajós River, where the Munduruku people’s opposition succeeded in stopping the São Luiz do Tapajós mega-dam. She has traveled the world with her message of hope and resistance. From the halls of the United Nations in Geneva, to the stages of the COP21 climate summit in Paris, to protesting the General Electric shareholder meeting in Florida, Antônia’s efforts have never been more timely.

This week her life’s work gained global recognition. The ASF prize not only demonstrates the power of her leadership and determination, but also the lasting legacy of all that was done to stop Belo Monte and to expose it for the crime that it is. She is resolute: “I will keep on fighting against what Belo Monte represents: a destructive, unsustainable, and unfeasible development model.”

And her message is one of hope: “I am but drop of water in the ocean, but together with many others we can shape the force of its waters and make change. This is what motivates my commitment to continue fighting, so that human rights, social-environmental justice, and that life be affirmed for present and future generations!”

Congratulations, Antônia. You are an inspiration to all of us working to resist social and ecological aggressions and forge a positive future in times of crisis.