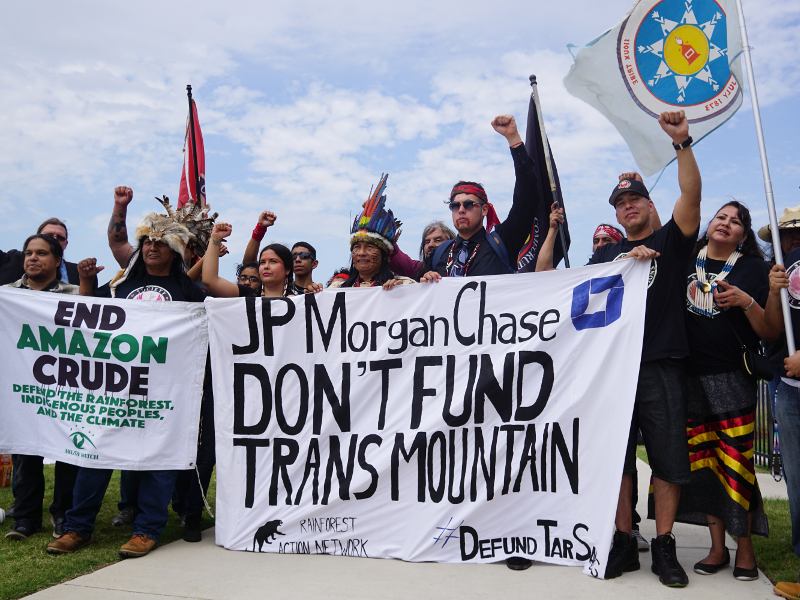 Leaders of the finance sector remain under scrutiny after announcing a series of new commitments to evaluate and reduce the environmental impacts of the companies they support. Although JPMorgan Chase and BlackRock have committed to take climate action, the scale of these commitments is sorely lacking. Here’s some background on why:

Last month, we wrote about the announcement from BlackRock CEO Larry Fink, in which he laid out commitments to reduce the company’s investments in coal and use its position as the world’s largest asset manager to advocate for more sustainable environmental policies in the companies it invests in. This was a significant announcement and a nod to the power of grassroots activism, given that BlackRock had previously denied it had the capacity to push companies to take climate action.

Soon after, BlackRock released a three-page statement about its approach to the agribusiness industry. It was promising, in that it named some of the key risks associated with the industry and committed to engaging with agribusiness companies to mitigate them. Specifically, BlackRock acknowledged that the agribusiness industry is linked to increased greenhouse gas emissions, illegal deforestation, biodiversity loss, and improper waste and water management, and can also negatively impact “social factors” including land rights, Indigenous rights, workers’ rights, and more. The statement reiterates that BlackRock’s investment stewardship team plans to “intensify its focus and engagement with companies on sustainability-related risks.” These are important acknowledgements and steps that influence the entire finance industry, but they don’t go far enough.

Yet BlackRock fails to explain in its statement how it plans to measure companies’ exposure to these risks and what standards it will use to gauge companies’ operations. What’s even more troubling is that Blackrock doesn’t lay out consequences for companies that continue to drive widespread deforestation, soil and water pollution, adverse public health impacts, biodiversity loss, land grabbing, labor rights abuses, and broader human rights violations.

Without specific guidelines for how these risks will be measured and addressed, BlackRock’s statement is just lip service.

Even so, the asset management giant’s announcement is already shaking up the industry. This week banking giant JPMorgan Chase took a step in the right direction when it announced that it will no longer finance oil and gas extraction in the Arctic National Wildlife Refuge, and that it will reduce its financing of coal projects around the world.

However, the policy falls drastically short of the magnitude of changes that environmental activists and Indigenous groups are demanding from leaders across the finance sector. Sierra Club and Rainforest Action Network responded to JPMorgan Chase’s announcement with a detailed analysis of the many ways it could be improved. The new policy only applies to new oil and gas projects in the Arctic, meaning that JPMorgan may still consider financing the expansion of existing projects in the region. It will also continue to finance projects in the Canadian tar sands, as well as gas fracking and the expansion of liquified natural gas facilities. It does not mention halting cash flows for the extraction of crude oil from the Amazon.

The new policy update from JPMorgan Chase also fails to address issues of human rights or the treatment of Indigenous peoples. This is particularly concerning because the bank is a leading financier of TC Energy, operator and joint owner of the Coastal GasLink pipeline, which is currently operating on Indigenous territory in Canada without consent. Earlier this month, Canadian police forcefully carried out a five-day militarized raid against peaceful Wet’suwet’en demonstrators calling for an end to the construction of the pipeline. JPMorgan is complicit in this human rights abuse by continuing to finance a company that is knowingly attempting to build a pipeline on Indigenous land, even after the Wet’suwet’en hereditary chiefs have made it abundantly clear that they oppose the project.

According to Rainforest Action Network, in the three years after the Paris Agreement was adopted, Chase provided more finance to the fossil fuel industry than its five major US peers combined. And previous Amazon Watch reports that examine the largest financial institutions driving crude oil extraction in the western Amazon found that JPMorgan Chase is a leading financier of Amazon crude oil operations. In the coming weeks, we will release new research into the financiers of Amazon crude – stay tuned!

For a long time, Wall Street giants like JPMorgan Chase and BlackRock were able to shield themselves from the “bad publicity” of their ties to human rights abuses and the destruction of rainforests like the Amazon. But now, financiers have become keenly aware that they can no longer hide and that they will be held accountable by the movement for climate justice.

It shouldn’t take a million baby steps for the finance sector to adopt measurable policies that prioritize Indigenous rights and prohibit deforestation and fossil fuel extraction. JPMorgan Chase and BlackRock need to go much further. They need to stand up and make sweeping changes to their policies, now.