Bolsonaro Threatens the Indigenous Right to Be | Amazon Watch

Bolsonaro Threatens the Indigenous Right to Be 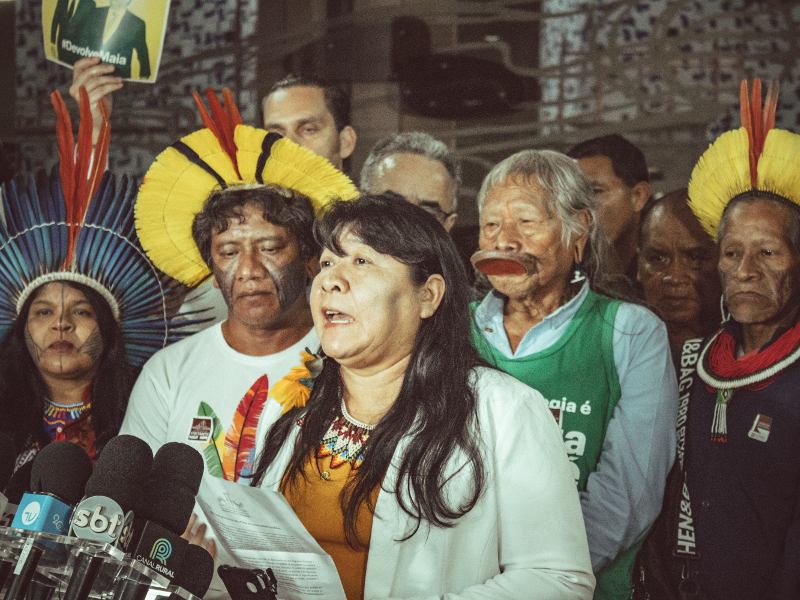 Brazil’s president once again attempts to erase the Indigenous way of life through his policies and actions. At the beginning of February, Bolsonaro introduced Proposed Law (PL) 191, which would open up demarcated territories for mining. As if his message weren’t clear enough, he is also attempting to appoint an ex-missionary to lead a crucial federal department responsible for the protection of Indigenous peoples.

All of these decisions are not surprising when phrases such as “the Amazon is for the Brazilians” or “too much land for a handful of ‘indians’ [sic]” are common in President Jair Bolsonaro’s speeches. In fact, being openly against Indigenous rights is one of the president’s main talking points, a position that he sees as both “nationalistic” and “logical.”

There is nothing logical about Bolsonaro’s forceful attempt to take land away from Indigenous people who have originally lived in and protected the Amazon Forest for thousands of years. These racist and calculated attacks are being conducted on many fronts, with Bolsonaro at the helm.

Most recently, Bolsonaro led the appointment of Ricardo Lopes Dias for a prominent position in FUNAI – the Federal Government Indigenous Agency. If confirmed, Dias would oversee the agency’s department for the isolated and recently contacted Indigenous nations. His appointment already rang the alarm of the UN special rapporteur, Victoria Tauli-Corpuz, due to his reputation as a well-known evangelical pastor with a history of harassing indigneous people under missionary pretenses. Unsurprisingly, Dias’s incompatible background was the exact reason he was chosen to fill that role. The Intercept recently published a recording of a closed-door conversation of far-right evangelicals patting themselves on the back for “putting someone there” that could “formally change [the] policy” of protecting Indigenous culture and religion from evangelical conversion.

“We know Ricardo [Dias] very well,” says Chieftain Waki, from the Matsés Nation. “We don’t want any church here because then I couldn’t paint my face, couldn’t use my snuff powder, or my frog poison. That’s why I won’t let it [happen],” remembers Waki the time Dias and his missionary associates lived by the border of Matsés territory, imposing their religious ruleset.

UN special rapporteur Tauli-Corpuz agrees that Dias is disrespectful of protected people’s customs, describing his appointment as “a dangerous decision that may have the potential to cause genocide among isolated Indigenous people.”

The Federal Prosecutor’s Office has opened a lawsuit against the nomination, in defense of Indigenous constitutional rights from someone whose “personal interests are incompatible with the position’s responsibilities.” Unfortunately, the lawsuit has already hit its first setback as the case judge found that there isn’t enough proof to “infer that such conflict of interest could justify [Dias’] removal.” In response, FUNAI accuses the Prosecutor’s Office of religious persecution. As long as Dias remains slated to head FUNAI, the threat remains.

Likewise, Brazilian Congresswoman Joênia Wapichana describes the threat of genocide when she talks about Bolsonaro’s proposed bill to open Indigenous territories to extractive industry such as mining, agribusiness activities, and dam-building. As Brazil’s first female Indigenous lawyer and lawmaker, she says that the bill is “blatantly unconstitutional.” It is a “reversal of environmental, social and Indigenous rights,” Wapichana contends, as it serves only “an elite that wants to exploit the most vulnerable and those who are unprotected.”

“Is this what we want: to wipe out the Indigenous peoples? Is this Brazil’s policy?” asked Rep. Wapichana.

Wapichana’s collective fight against Proposed Law (PL) 191 has been showing results. After powerful demonstrations in Brasília with the presence of renowned leaders such as Chief Raoni Metuktire, the demonstrators succeeded in securing a compromise from the President of the Chamber of Deputies, Rodrigo Maia. On February 18th, after days of campaigning against PL 191 with our partners at the Association of Brazil’s Indigenous Peoples (APIB), Congresswoman Wapichana, and a broad coalition of environmental and media organizations, Maia announced that he is no rush to pass the bill. In a meeting with Indigenous leaders at the Chamber of Deputies, Maia said, “This project is not a priority for the Chamber. It is not going to be discussed at this time. This bill will remain here, so that in the future we can think of a debate about Indigenous territories with the Indigenous communities, and in that way move forward with any matter of legislation.”

Using diplomatic language, Maia affirmed that “Parliament won’t be hostile against Indigenous peoples,” and promised not to take PL 191 to a vote this session. Even though this is not a complete dismissal of the bill, it is proof of the effectiveness of grassroots action against the federal government’s policies.

Although Rodrigo Maia has decided to table the proposed law, we have indications that Bolsonaro’s administration is setting up the capital to finance projects across the Brazilian Amazon. The minister of mining and energy of Brazil, Bento Costa Lima Leite de Albuquerque Júnior, is expected to officially open the Brazil market during the first week of March at the World’s Premier Mineral Exploration & Mining Convention in Toronto. At the convention, the Brazil-Canada Chamber of Commerce is presenting the 14th Edition of the Brazil-Canada PDAC 2020, a series of events focused on the Brazilian mineral exploration and mining industries.

Undeniably, Bolsonaro’s regime is advocating open warfare against Indigenous lives and their cultures. We must always vigorously affirm that their lives and customs matter. We must reject the notion that this respect is out of charity. Instead we must promote the deep understanding that indigneous people are the keepers the essential knowledge of how to protect the Amazon rainforest. In Sônia Guajajara’s words, “Bolsonaro’s dream is to exterminate us. It is our nightmare – a nightmare that we won’t allow to come true.”

Congresswoman Wapichana, who led the Indigenous delegation that met Rodrigo Maia, will visit Washington, DC between February 24th and 28th to discuss Brazil’s worsening human rights and environmental crisis and specifically to bring international attention to the threats indigneous peoples face, such as Bolsonaro’s proposed law. She comes at the invitation of Rep. Deb Haaland, her Indigenous counterpart in the U.S. Congress, to meet with American progressive congresswomen to coordinate their efforts at this critical moment. Speaking on the delegation, the congresswoman said, “At a time when we are vulnerable to a series of attacks and setbacks, it is important that we approach leaders who are also committed to the Indigenous and environmental cause in order to articulate a common and proactive agenda between our countries”

Indigenous peoples have the right to be, to see their right to self-determination fully observed. Any system or policy or government appointment that attempts to deny this right must be seen as an open attack against all humankind. Protecting Indigenous lives is the only way to protect the Amazon, for the benefit of humanity as a whole. 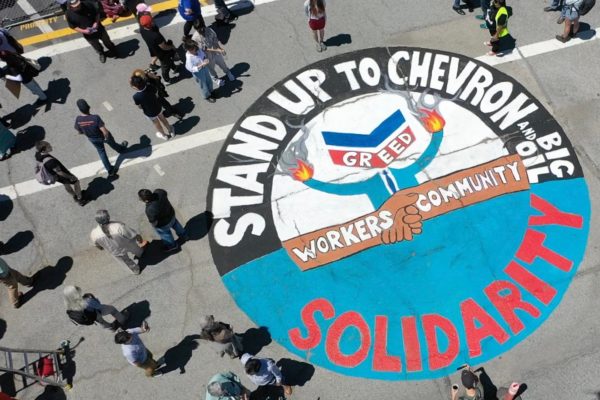