In advance of last December’s UN climate summit in Cancún, global investors representing an eye-popping $15 trillion in capital called for bold action on climate change. They emphasized the importance of government leadership in promoting renewable energy sources and phasing out dirty fossil fuels. They also called for “A rapid timeframe for implementation of efforts to reduce emissions from deforestation and forest degradation (REDD and REDD-plus)” and “Expanding and deepening the international carbon market, including greater clarity on the future interplay of the Carbon Development Mechanism (CDM), Joint Implementation (JI) and emerging crediting mechanisms such as Nationally Appropriate Mitigation Actions (NAMAs) and REDD-plus”.1

Reducing Emissions from Deforestation and forest Degradation (REDD in climate-speak) has emerged in recent years as a hot prospect amongst various climate change mitigation strategies, which aim to reduce rates of tropical forest deforestation and the estimated 15% of annual greenhouse gas emissions that result. Conventional wisdom says REDD represents a rare point of agreement between industrialized powers, tropical countries, private industry, and many environmental groups. The theory, in short, is to make forests more valuable standing than cut down, providing an counter-balance to the economic drivers that lead to their destruction.

U.S.-based investors are also reading the tea-leaves and looking to get into the action. At the Carbon TradeEx America conference in late September, a group of investors reportedly established a $1 billion REDD fund. These funds would provide seed money for projects that could eventually facilitate carbon offsets to energy utilities and oil companies. By way of comparison, this amount matches REDD “quick start” funding commitments recently announced by the U.S. government.

While an international REDD architecture has been discussed within negotiations at the UN climate convention, numerous other fora have been busily angling for a piece of the anticipated multi-billion pie. Multilateral institutions like the World Bank and the Inter-American Development Bank (IDB) have been positioning themselves as prime conduits for climate financing. A gaggle of countries have formed the REDD+ Partnership, including Norway which has ponied up over $1 billion for bilateral REDD assistance. And California, as the 8th largest economy in the world ($1.85 trillion in 2008), is working to issue what would be the first market-grade carbon credits scheme, having signed sub-national offset agreements with provinces and states such as Aceh in Indonesia, Acre in Brazil, and Chiapas in Mexico.

Reducing the rates of rainforest deforestation is a goal universally shared by environmental groups like Amazon Watch. The devil, as always, is in the details, many of which have yet to be agreed upon or are being finalized without meaningful involvement of impacted stakeholders.

At the same time that some major environmental groups have come out enthusiastically as REDD advocates – a number of which are positioning themselves to channel REDD funds – many other organizations and social movements have begun to articulate the emerging problems. Investors must understand these issues and actively find ways to avoid them, or risk contributing to a well-intentioned system that ultimately does more damage than good.

Potential risks any investor in carbon offsets should be aware of include:

Though REDD is a relatively nascent concept, a number of initial case studies have emerged pointing to the challenges in bridging the theory with the ground reality in tropical countries like Brazil and Bolivia.

Investigative journalist Mark Schapiro reported in the pages of Mother Jones magazine on an offset project in the Cachoeira reserve in the Brazilian state of Paraná.2 U.S. based corporations General Motors, Chevron, and American Electric Power (AEP) provided $18 million for The Nature Conservancy to protect some 50,000 acres of tropical forest. Schapiro found that people have been forced to leave the reserve area, as “Green Police” prevent basic subsistence activities. He reports documenting “numerous stories of people being harassed, arrested, and shot at while looking for food, wood, or reeds”. Schapiro’s article concludes, “The question now being debated is whether the fate of the forests – and their people – will rest on the ability of industries to pay for preserving distant trees rather than reducing emissions closer to home.”

In a seminal report titled, “Carbon Scam”, Greenpeace exposed the case of the Noel Kempff Climate Action Project in Bolivia3. This project, financed by AEP, BP Amoco, and Pacificorp, invested millions of dollars to ostensibly protect the forest from logging. After a decade, however, the estimated reductions in GHG emissions from the project dropped by 90% (from 55 million to 5.8 million metric tons of CO2.)  Amongst many other criticisms, the report also strongly called into question the assertion that the “avoided deforestation” did not simply happen in a neighboring region instead, a vexing problem of REDD known as “leakage”.

Far beyond REDD, there are serious questions about the viability of the broader carbon market to actually reduce greenhouse gas emissions. According to a report recently issued by EU-based forestry watchdog group FERN, “Financial speculation – rather than the need to comply with emissions targets – has become the underlying driving force of the carbon market.”4 They note that “Many analysts have pointed to the worrying similarities between trading in carbon offset credits and sub-prime mortgage derivatives. They both run relatively high risks of not delivering, yet comprise a disturbingly high proportion of the market”.

Concurrently, indigenous groups from around the world have also raised concerns about the carbon market. On December 6th, in the midst of the Cancún conference, the International Indigenous Peoples Forum on Climate Change issued a statement, which included the following passage: “We also continue to reject the carbon market as a false solution to climate change. Our Mother Earth is not a commodity. In particular, we insist that forests serve a variety of functions and are the source of life for Indigenous Peoples around the world, including those in voluntary isolation.  For this reason, they cannot be part of any program or scheme based on the carbon market.”5

If not investing in the carbon market, forest offsets, or REDD, what should investors concerned about climate change, the world’s forests, and indigenous peoples be doing?

One: Investors should focus on investments that help reduce emissions of our own society, a debt we collectively owe to the rest of the world. These could include low-carbon infrastructure, sustainable energy like solar and wind power, and energy efficiency.

Two: Investors can help reduce tropical deforestation and global emissions by leveraging their influence within corporations that have direct impacts on forests by proposing policies within the oil, gas, mining, hydroelectric and agricultural sectors. Specific examples include supporting moratoriums on new fossil fuel developments, hydroelectric projects on or near indigenous territories or ecologically sensitive habitats; supply chain assessments and standards on using forest-based agricultural or wood products, such as the palm oil policies adopted by Nestle and General Mills.

Three: Investors can help local populations by applying strict human and indigenous rights filters, such as applying the UN Declaration on the rights of Indigenous Peoples (UNDRIP), to all climate investments. Corporate investments should also be leveraged to push for the adoption of indigenous rights policies, such as requiring free, prior, and informed consent (FPIC) of local communities around projects which impact them.

In the final analysis (and catastrophic climate change could really make it “final”), global investors have both a historic responsibility and a central role to play in bringing their resources to bear to help humanity avoid climate calamity. While “market-based solutions” like the carbon market will naturally appeal to investors, these options must be heavily scrutinized for their actual climate and human rights impacts. Unfortunately, we don’t have a long time to get it right. 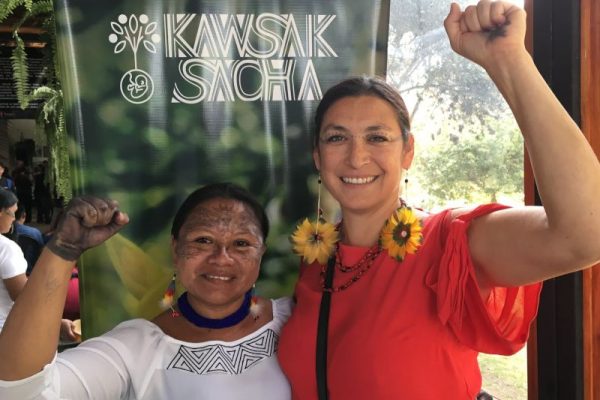 Protecting the rainforest and our climate in solidarity with Indigenous peoples

Amazon Watch is celebrating 25 years of radical and effective solidarity with Indigenous peoples across the Amazon Basin! What started with our founder, Atossa Soltani, confronting Fernando Cardoso, then the president of Brazil, face-to-face on March 11, 1996, is now a powerful organization building upon that legacy and deepening our commitment to...

Thank you for supporting Amazon Watch!

Other ways to give and more information may be found on our Donate page.