To Paris: Don’t Let Ecuador Sell You the Amazon! 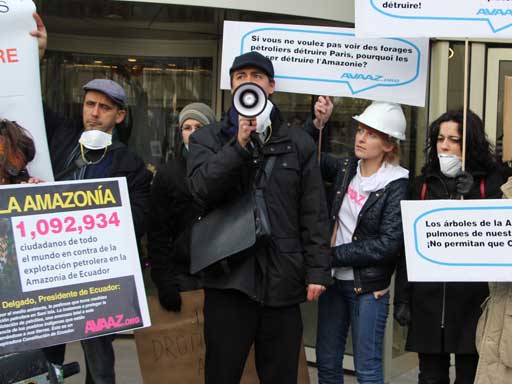 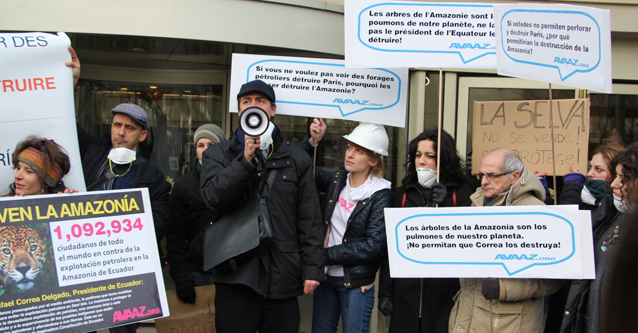 Send a letter urging President Correa to respect indigenous rights and the rights of nature.

Donning hard hats and face masks alongside our allies at Avaaz and Planète Amazone, Amazon Watch helped lead a theatrical “oil drill” stunt in front of a Parisian luxury hotel this week to challenge the Ecuadorian government’s attempts to transform its southern Amazon into a vast oil field.

As Ecuadorian ministers met with European oil executives and investors inside to auction off huge oil concessions as part of the country’s XI Round (Ronda Sur Oriente), French activists took to the streets to call attention to the disaster oil drilling represents for the forest and seven threatened indigenous communities.

During the action protestors presented an international petition signed by 1,092,950 people calling on President Rafael Correa to suspend his government’s tendering of oil concessions that threaten to devastate the rainforest and the native communities that live there. Tuesday’s protests also targeted European investors and oil executives in an attempt to dissuade them from supporting the XI round.

The meeting in Paris was just the latest stop of the Ecuadorian government’s global tour to promote the oil round. Non-Renewable Natural Resources Minister Wilson Pastor and Hydrocarbons Minister Andres Donoso have held closed-door meetings with oil executives in Bogota and Houston and are planning to make stops in Singapore and Beijing in their attempts to auction off nearly ten million acres of the Ecuadorian Amazon. However, throughout the tour they somehow forgot to mention that the indigenous nationalities have unified in opposition against drilling on their land.

In Houston Amazon Watch and local activists recently joined indigenous leaders, who traveled from Ecuador to tell the government that their land is not for sale.

Jaime Vargas, President of the Achuar Nationality of Ecuador (NAE) told reporters “we’ve seen the impact of oil extraction in Ecuador. We know that it only brings contamination, poverty, and cultural destruction. We will defend our sacred lands and culture as we have for millennia.”

A dozen journalists from major French outlets joined more than 20 protesters giving our small but spirited protest featured prominent media coverage from leading publications in France and Ecuador. The message to the auctioneers was clear: wherever you go we’ll be there. 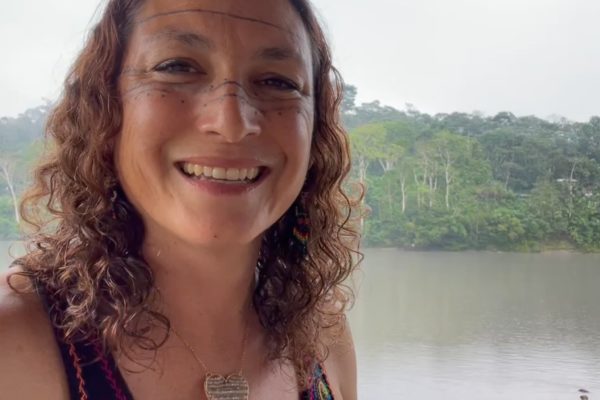