Notes from the Frontlines: A Journey with the Munduruku into the Tapajós | Amazon Watch

Notes from the Frontlines: A Journey with the Munduruku into the Tapajós 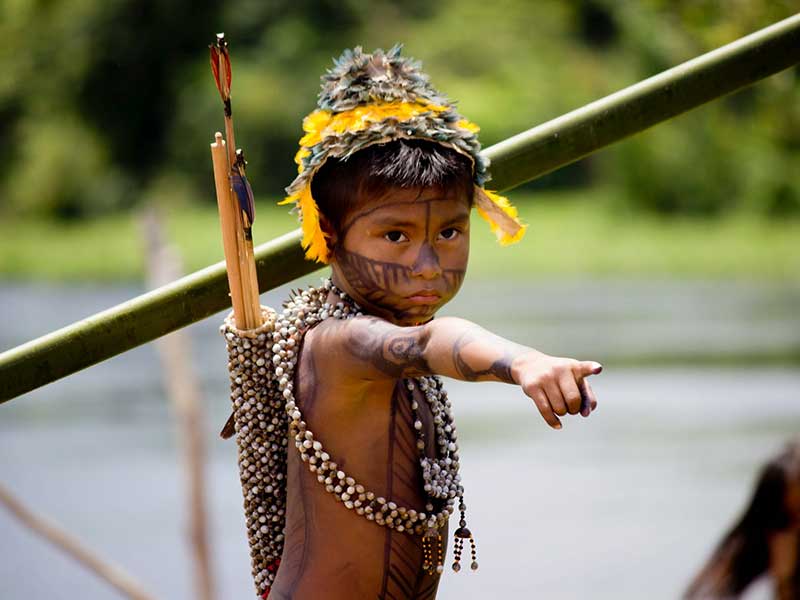 Last week Amazon Watch joined a powerful assembly in the Munduruku community of Waroapompu in the Tapajós region of Brazil to discuss how the Munduruku will strengthen themselves in resistance to dams planned within their territory. Brazil Program Coordinator Maíra Irigaray shares these beautiful images and journal notes from the journey.

Our plane lands in Waroapompu territory. A mob of kids eagerly run toward us to help us carry our gear. It’s a tradition for the Munduruku to receive you and carry your stuff when you arrive in their territory, and despite the fact that these were just little kids, we let the tradition play out…

The assembly was supposed to start today, but hard rains made getting people there late so the day was devoted to receiving guests as they scattered in. Over 20 canoes and small boats arrived one after the other, carrying meat from animals they hunted and people – lots of people. I alone counted some 700 (later it became over 800). An entrance was built to welcome the guests, who were each received with traditional chants of welcome upon arrival.

All day and night the Munduruku ran around preparing for the assembly and painting their bodies, knowing that without their traditional paints they would not be able to enter the main saloon where the assembly is to take place.

The assembly starts as the morning rises. The salon can barely fit the hundreds of Munduruku that gather inside and outside for the opening ceremonies. The first part of the day is devoted to different religious groups to present their believes, and words of wisdom and love. Everyone listens and follows each group’s songs respectfully, as if they were all from the same religion. The most devoted stand up when there is a mentioning of Jesus…It is interesting how in such a far away land, old traditions blend with new traditions and they can all look like one.

Maria Leusa, one of the leaders from the Ipereg Ayu Movement, leads transitions between moments in the assembly, carrying her little girl Ana Luiza in her arms who shamelessly grabs a breast to feed herself while the meeting flows.

The Munduruku are well known for their strength and sense of humor, and the day is filled with jokes between presentations. Today 79 communities came forward to present themselves; tomorrow there will be more.

On Holy Friday, they devote the day to the church and to finalize presentations of the people. So we leave for a boat ride to another village nearby called Missão. It’s a beautiful ride, and with 900 people living there, probably one of the biggest villages of the estimated 130 in the Tapajós region. On the way back we see a pink dolphin who surfaces as if to say “hi.” Back in Waroapompu, meetings go on until late night, evolving into a celebration that lasts until 3am. At 5am the Munduruku are up again, ready for a new day!

We escape meetings to watch the women prepare a traditional bread made of yucca and Brazil nuts. The process is long but amazing and the bread tastes like heaven.
In the afternoon we interview Maria Leusa, the newly-chosen coordinator of the resistance movement Ipereg Ayu. After that the meeting continues with discussions about how to strengthen the association Pusuru to which Josias is elected as President. New leaders take their place at midnight while the full moon kisses the river.

The agenda is vast. They still have to discuss PEC 215, the Munduruku University, the health system, and the Sawre Muybu demarcation. This time they don’t even take a break for lunch. We steal away the general chief Arnaldo Kaba Munduruku for an interview. The meetings go until midnight and an executive decision of expelling an unwelcome visit happens. It’s a young anthropologist who claims to come in support, but the Munduruku don’t believe in people who come to “study” their lands, as many of those studies have been used against them to enable projects on their territory such as dams. The day ends with a sense of tension in the air.

I got sick and decided to leave a day early. The local water and food can be a little rough for non-local people. We stay long enough to witness the arrival of Federal Prosecutor Luís de Camões Lima Boaventura, who has supported the Tapajós and indigenous cause for a long time. We know today will be devoted to discussing rights – especially the right to Free Prior and Informed Consent.

As we depart on a small charter flight over the vast Amazon that appears a patchwork of green and gray life and destruction, I remember the words of Antonio Dace Munduruku, who explained how hard it was to go to such an assembly: “If it wasn’t for government plans, we wouldn’t have to be here. This devious plan to build dams in our territory humiliates us, and takes away our culture, and our physical and moral dignity. It cannot be considered clean energy.”