Calgary, Canada – Amidst protests from a broad coalition of Canadians and international allies, Ecuadorian government officials met with Canadian investors and oil company executives Wednesday at the Telus Convention Center in Calgary. Labor unionists, aboriginals, environmentalists and faith groups united in support of Idle No More, calling on the Ecuadorian government to suspend its auction of oil concessions in the Ecuadorian Amazon rainforest. The group delivered a declaration of opposition from five indigenous nationalities whose rainforest communities would be devastated by the oil round.

“As an indigenous person, I would like to know why you are auctioning off over three million hectares of indigenous land in the Amazon without the consent of the people who live there,” said Michelle Thrush, a Gemini award-winning actress and aboriginal activist who confronted the Ecuadorian government at the meeting. “We have here a declaration of opposition coming from the indigenous communities whose lives and livelihoods will be devastated by these blocks…it is extremely important for the children and grandchildren of these people that this project does not go forward.”

The nationalities claim that in none of the blocks has the Ecuadorian government obtained Free, Prior and Informed Consent (FPIC), an internationally recognized human rights benchmark that is intended to protect the rights of indigenous communities whose lives and lands are affected by extractive mega-projects such as oil drilling. This is in direct violation of the Inter-American Court on Human Rights July ruling in favor of the Kichwa community of Sarayaku stating that the government must properly consult with indigenous communities prior to oil operations and pay for physical and “moral” damages to the community.

“None of the seven indigenous groups living in the rainforest territory has given approval for this massive auctioning of the Amazon,” said Adam Zuckerman of environmental and human rights organization Amazon Watch. “Any oil company considering making a bid can anticipate relentless resistance from these peoples.”

Now on its last stop, the 11th Oil Round roadshow has been met by forceful protests in Quito, Houston, and Paris and growing questions about the government’s close ties with Chinese oil companies. Over one million people have signed a petition calling on Ecuadorian President Rafael Correa to cancel the oil round.

At a press conference last Tuesday in the Amazonian city of Puyo, Ecuador, indigenous leaders soundly rejected the consultation process and expressed their communities’ firm opposition to the 11th Oil Round.

“We have decided not to allow the extractives companies to enter and carry out operations in our territory,” said Cristóbal Jimpikit, president of the Shuar Federation of Pastaza. “We declare a state of highest alert in the face of companies’ plans to enter our communities.”

Speaking at a February protest of the oil round, President of the Achuar Nationality of Ecuador Jaime Vargas noted that communities in the northern Ecuadorian Amazon are still suffering from contamination that recently led to a $19 billion ruling for the communities.

“Any drilling activities on our lands will be met with fierce resistance,” said Vargas. “We’ve seen the impact of oil extraction in Ecuador and the world and we know that it only brings contamination, poverty, and cultural destruction. We will defend our sacred lands and culture as we have for millennia.” 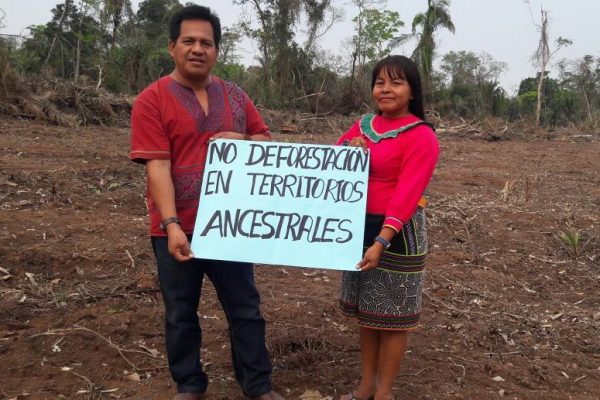